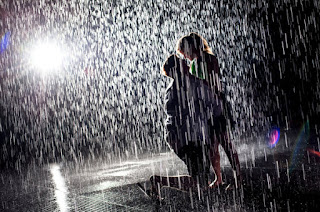 He stood watching the rain from his French window. There was no sun, no moon, and no stars.  It was the birth of the night with the fumes of clouds all around has hidden the sky. He stood watching the rain, drop by drop.  He then decided to step out into the down pour, to taste the elixir from the heaven.  She stood there with her arms open to the world in the down pour.  He walked to her from behind, stood close to her leaving no space for the air to pass through.  Water dilutes all the adhesives but between them the rain acted as an adhesive.  The chillness around froze them together and the warmth of their bodies played the roles of magnet, attracting opposite poles.  He ran his nose over her hair; there was a unique fragrance she holds. He buried his head in her hair in the confusion whether the fragrance is hers’ or the rains’ or the blend of the both.  She didn’t utter a word, neither he.  The rain slowed down to drizzles.  She stood leaning back on him with her eyes closed. A drop of rain ran from her forehead and stopped on the tip of her nose.  The light from the street lamp lit the rain drop on the nose tip to illuminate it. Drenched in the rain and lulled by the breeze the adhesive was stronger now. She turned and hugged him.  She could hear his heart beat.  She was safer in his arms, safe and warm.  He could feel her on his skin; he could feel her in his heart and soul.  He wished the rain doesn’t stops; he wished they both could stand still and melt in the rain to vanish in to the sky.  There was no acoustic of words, there is any silence either; they both spoke with each other in the language of love. It darkened.  The moon rose from the horizon and tried to peep between the clouds.  But, as if to safeguard the both of them from the chillness of the moon the clouds gathered again and hid them from the moon.  It was raining heavily now; more adhesives now.  There was a sudden thunder; clouds making love, the lightening lit the place bright.  He backed down and opened his eyes.


The rain was there, the clouds were there, and her fragrance was still in his body.  She disappeared.  He stood still in the rain wanting to melt and escape from his body to find her; to find his own soul.
Posted by sathish at 8:30 PM