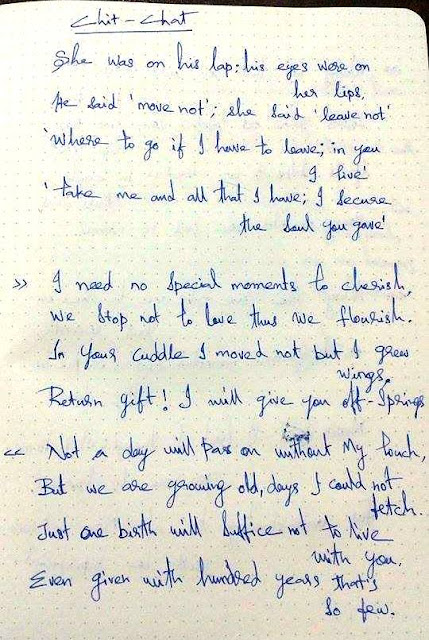 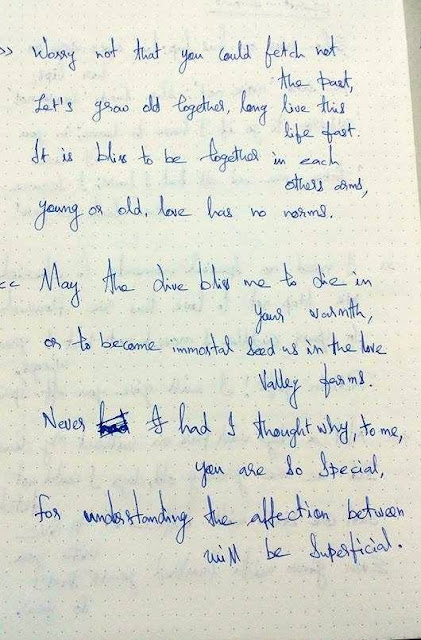 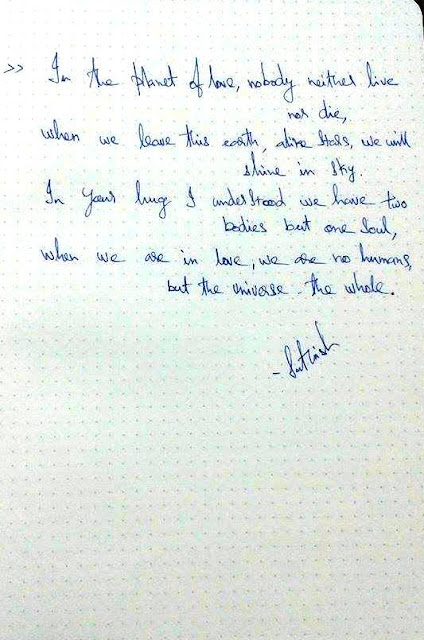 ...She came back to me; from where is something I do not know.  But I know I lost her and found her back.  She was closer to me.  I felt her aroma nostalgic. I felt that warmth that I experienced before.  I closed my eyes in her bosom…

Centuries back; when I neither have anything to lose nor something to gain I was looking at the sky.  There were no moon, no stars though it is dark.  At a very long distance I saw a flying object that which my eyes could not reject.  It came, flying, towards me just to see ‘who is that looking at me’. Night could not have been brightened up more even with the full shone moon.  She lit the sky, with her angelic fly.  Her wings are soft and white like camouflaged petals of roses.  She is an angel from up above, with little melancholy in her face; she stood in air with her wings wide opened.

“O! Angel” I exclaimed.  She did nothing but smiled at my astonishment.  I looked deep into her eyes and with no second thought I fell in love with her.  I raised my hands towards her, opened my arms for her.  She knows I cannot fly and I am no equal to an angel.  She jumped down from the sky and walked to my open arms.  Still looking at my eyes she said “you eyes were sharper than the sword, faster than the spear.  I felt you shot an arrow with your eyes to my bosom so that I fell in your arms.”  That was sweet to hear from an angel but I forgot to ask whether the arrow has hurt her.

She came closer and succumbed to me in total.  I was afraid that whether I deserve an angel.  She winded her wings and spent all her time in my arms.  She never let me leave, not an inch from her.  It was soothing to live in the aroma of love.  The warmth that she gave was godly for sure she should have learnt it from the divine.  I caressed her hair, lived in her beauty, sufficed my soul in her love, mesmerized in her liveliness, enchanted in her innocence, and wondered about her mischievousness.  She refused even the air to pass between us.  She rejected the time to steel the moments we spent together.  Those moments neither moved nor vanished; it just stays their but we moved.

I know she is an angel, she has gorgeous wings to fly and I knew she wanted to fly in the sky but not alone.  She took me in air far from the human spies, high in the sky away from any mortal beings. The world looked small and worthless to live, sky looked brighter than what I saw from earth, and she looked like a deity what she originally is.  I was put in a trance. Though the sun was near it didn’t scorch my skin, though the moon was near it didn’t freeze me to ice, though the air was faster I never had trouble to breathe. Even when we flew over the stratosphere I never suffocated.

Once in a while her wings hurt my eyes but she has to swing her wings to fly.  I didn’t care when it hurt but as the sky become older to my eyes the hurting wings started bothering my mind.  Brain know if she didn’t use her wings we both will fall and die, but mind said that it was, once in a while, hindering my vision.  But then my brain said you have to learn to protect yourself from her wings that was stopping your vision which is a matter of seconds.

I know it is not a matter to worry I tried not to react neither I told her the fact.  Without my knowing the dormant volcano of rage become extinct and once her wings stuck my eyes the larva of anger burst to its high.  Rage diminished my sight, anger enclosed my heart.  I removed my sword from its scabbard; she was frightened, I whirled my hands, she looked astonished but didn’t react.  I stuck her wing with the sharpest sword and I saw it was broken.  She was bleeding; pain made her numb, she could hardly fly but managed to bring me back to ground.  She wanted me not to leave her but I rejected her hand and walked away. From a long distance I saw her dejected and falling on the ground. She lifted her hands to call me back before she lost herself totally on to the ground.  I walked away in rage.

In shock I moved away from her bosom for I now know what I have done to an angel, hundreds of years back, which God has sent to me.  She smiled as if she remembers too.  She came closer again and hugged me with all her love.

“Forgive me” I said.
“No…”
“Why?” I asked
“You are back, that is what I wanted other things are nothing but past, I have nothing to forgive for you are just a different body but my soul” She tightened her hug.  Hug - the shrug of forgiveness.


“I am sorry” I was melted in the warmth of her love…
Posted by sathish at 1:09 AM No comments:

Ghost-writer; none other than that role I play.  Who is going to believe that the story is not mine!  I just read, write, and plagiarize from the book that was already written by the immortal, invisible hands. Everyday is an anecdote; I read it and rephrase then rewrite.  All the blames, all the sins, all that is engraved to happen is not just happening but well planned and well executed by the energy that keeps me moving.  The flow of tears, moments of anguish, irritation of angry are all were the stones in the path I stroll.  I walk naked with bare foot, the words that are thrown at me were enthroned in the stones before it was aimed at me; it hurts but could stop me not even for an inch.  The blames and the curses laid on my path were the thorns well set for me to walk on; it tears my palms and when I fall down it stings my arms.  All this could make me weak but could stop me not from my walk.

I hold the hands of love when I was about to fall down and sometimes I fall down because of the hands that suppose to hold me is already trodden.  Saying all this I thought I was enlightened but the bitter truth is different; I was entangled.  That is perfect; this entanglement is perfect as it teaches me flexibility which I eschewed for a life time.

In the name of love it is all fair for no war is better than that of the fight for love.  Recite it thousand times the word love will be love, just a four letter word to write but to prove that I just not write but I breathe it is a task for a century.  I become good when bent down before the dogmas of fugacious community. And when the rules are broken all the thousand act of humility becomes insanity.  I’m named a sinner.

To force me to live with the society is like feeding a goat with cow’s meat.  To teach me to swim is an act of insanity when I was made to fly; water for me is just to drink not to get drenched.  I don't have the count of breathes I had had and I have no idea on how much more air will get into my lungs and how long could I breathe out that went in.  All that I know is I am just a Ghost-writer.  You could pluck my pen, break my hand, blind my eyes, may be kill my brain, and burn the paper in which I wrote but you will not find the manuscript; I am just a Ghost-writer.

The words are not mine; this story has no line, reading this will not make you fine. Nothing have I created new, the days I am going to erode this planet are few, as a proof of my living I don't want to leave any residue.  I might make no one happy, I live my life crappy but I will die not when I am living.

When I am gone another writer will be born.  He might write many times better than me, he might rephrase the sentence thousand times faster than me but he will again be a ghost-writer.  No life is new; no words are new everything has to be written then rewritten.  Until he know that he is just plagiarizing from the book written in the language of divine he could never write a story better than mine.
Posted by sathish at 11:49 PM No comments: