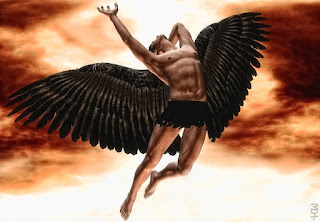 …how do I start when the journey is still on! Once upon a time I was born, like everyone.  What difference does it makes! I grew wings when I learnt to run.  The wings were soft and silky attached to my tough and tight skin.  And then I flew like no birds could have done.  I know, I am no bird, might be because of that the fly was euphoric.  I thought there was a sky which could be reached and touched so I left the ground and flew to the clouds.  The clouds were dense and blinding.  I was skeptical to pass through as the clouds might knock me down when it was moving fast in its phase. No, it didn’t but allowed me to enter into it.  I was thinking that I entered into the clouds but the clouds entered me and left me with no sign.  Feathers of my wings froze when a cloud passed me.  I moved up passing through the mist and found heaven.  The heaven as I was taught and made to conjure from the day I know the word God.  I was all milky white hiding anything below it.  It was the land of mist; clouds coalesced to form the ground of heaven that everyone was imagining.

It looked beautiful than every human thinks, but angels were missing and the Gods too.  At the end of the white land, in the west, there sat the god, the Sun.  He warmed my frozen feathers and charmed me with vital powers with his rays.  I have read about the yogis that eat nothing and drink nothing but lived only with the light of Sun.  I am no yogi and never wanted to be one but the rays of the Sun was such a calling, and soothing.

With all the vital powers and ecstasy in heart I wanted to touch the God.  I flew towards the Sun.  In few minutes it was all dark and cold.  The night that fell frightened me to show me the hell but then the breezy Moon rose lighting up the stars here and there.  The fear that engulfed vanished as there was no fear of death.  How could I die when there is nothing above and nothing below! How could I die when there is no one to kill me and no one to shrill me!

And I rose high and higher to the Moon and suddenly found the Sun beyond the shadow of the earth.  With no second thought I shuttered my wings towards Him, looking for warmth and to escape from the cold that night has imbibed.  The faster I moved the warmer it was and it became hot.  No matter what, I wanted to reach Him, I trusted my wings.  The nearer I was to Him scorching it became and I believed in not giving up thus I flew towards Him with no hesitation.

In no time my soft wings caught fire, I saw every feather of my wings burning and I was falling down from the never existing sky.  The fire scorched my skin and blood fluttered in the air and when all my feathers were burnt I saw my wings was full of blood, in every place of feathers blood filled it up and that was the last thing I saw before I closed my eyes.

An infinite time lapsed when I opened my eyes, it was hard to get up but I woke up.  I still had wings but now it was all dark red, it was not soft that gave me vanity but strong and rigid like iron that gave me strength.  I tried to move my wings to fly; it was heavy weighing many times of my body and brain.  I rose to the sky with all will I had.  I saw a bird, a vulture, stronger than me in looks in the sky flying towards me.  when it neared me I hid myself in my wings in fear and when I open my wings again I saw the vulture bleeding and falling down with pain.  I remembered, my wings are no longer soft but strong and sharp hardened with my blood.

In the tide of life

In the tide of life;

A mild needle enters slowly,
In the middle of heart newly.

The heart that suffered loss,
Connected to the eyes that lost focus.

It’s fight between the God and Mind,
And the plan, where do we find?

The blade of guilt tears the heart apart,
Souls brake and go with souls that depart.

In the storm of death it rains in the eyes,
In the tide of life it’s all god’s lies!
Posted by sathish at 9:33 PM