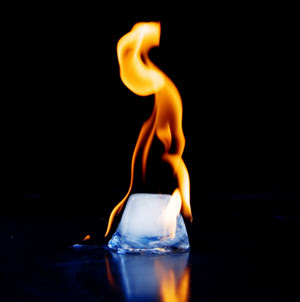 When the first drop of the drizzle got evaporated by the thickest flame, I thought water is not so powerful, fire is the most powerful.  And another drop, another drop and another drop slowly fire turned to fumes and in sometime there are fumes, only fumes.  Where went the fire, the powerful flame that evaporated the first drop of drizzle?  And what is this fume from where this came?  Could not be the mixture of water and fire be fume but what is fume? It is neither vapor of the water nor the power of the fire but toxic feeling of the combination I guess.  Is fume more powerful than water and the fire since it irritates the eyes to make it burn and again it makes it to shed water, I feel fume is powerful, now the fire and tear or in same place.   Along with whatever the fume brings it also tries makes one to suffocate, stops the breathing, spread the toxic feel across the physical and vital parts, sometimes the over consumption challenges the immaculate string that God holds in his hands which is connected to human hearts at the other end.  When all these things are at one side, and when the droplets stops kissing the fire flames and a tiny, very tiny spark which was hiding itself in a corner of a corner rejuvenates the ignition and the fire kills the fume and brings the life back to the heart.

Though everybody knows this is what happens to anybody in love, who believes!