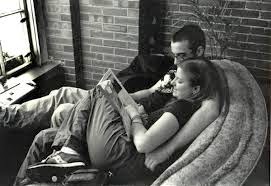 A mild music mesmerized the evening, a soft and chilled breeze added romance to the moment.  It was about to rain, few drizzles here and there made the earth to revel its aromatic fragrance.  The twilight was painted in orange as if a kid played with colors on the wall.  The clouds were in process of merging with one another alike a just married couple, but the wind acted as the decorum to make them stay apart for little awhile.  The time was fast approaching for the day to embrace the night and night to glitter in shy but the clouds hid all the glittering of the night alike a woman hiding her shy when her man touches her; and in her ear whispers some lies.

He was holding his favorite book, which he was reading for the nth time.  Leaning over the cushion, watching the fast approaching night through the window he was again falling in love with Karmy.
“Is it again the Broken Wings” she asked him sitting next to him.
“Yes, it suites the evening and this climate” he replied.
“Yes, of course it suites the evening” she replied.
“…the only writer born in this world, Gibran. Nobody could make me realize the love I have inside me other than this book, Gibran, and…” he stopped
“…and?” she said
“You…” He said.
He opened his arms; she got closer to him and leaned back over his chest.  He held her tightly from behind, the book in his right hand and her hip in his left.
“Shall we read together…?” he asked.
“I love to…” she replied.

They filled the evening romance with the essence of the book and the love it bestowed them.  His lips, in between the read, read her cheeks sometimes.
“Did you see the love of Selma Karmy in me…?” she asked.
“No” he replied.  She frowned slightly.
“I see the beauty of this book – Broken Wings – in you” he smiled. She closed her eyes and clutched his hand that was holding her on her hip.  A warm breeze crossed her cheeks and it rained there.  She kissed him back.

“What has changed after marriage or after I came in to your life?” she whispered.
“…many times I kissed this book, and after marriage it kissed me back” he said and kept his silence continue.  She understands his silence and in that silence they read the book, he read her, she read him.

After a deep long silence he whispered her name in her ear.  She said nothing.
“…how could you decipher the love in my silence? Many a time I was afraid that this strange silence of mine would irritate you, but you showed no sign of any such thing.  But I could not talk anything more than that my silence could not say. The warmness of your caress adds fuel to my silence and makes me go speechless.” He said

“ssshhhh” she sounded and turned her head to one side with her ear over his chest and said “don’t talk, I am listening to your heart”.

He closed the book and surfed over her abdomen. She clutched his shirt and said “May the third heart beat, by God’s grace, be heard very soon in our life”


“My man, I am listening to your heart” she kissed him in his chest.

PS: Selma Karmy was the beloved of Kahlil Gibran, read "Broken Wings"  to get to know more about.
Posted by sathish at 12:32 AM