Embedded wand of an Enchantress

No author chooses the title; it’s the tile that chooses its author.  Being said that - the title that has chosen me
‘Embedded wand of an Enchantress’
Probably that was the first time I shouted a feminine name along with the crowd and the only name I liked the very first moment.  The concept of soul mate or the feminine part of my soul – I saw. ‘The powerful, light blended, vision’ I thought ‘could kill me in a second, so that the master has given it a transparent scabbard’. 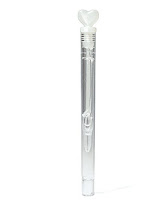 And the Wand, horizontally broken, which could croon – beautiful! Wand could croon – the spell which I heard very least but made me dwell into a fairy’s world.  Yes the fairy’s world – euphoric blue all around and my enchantress in the middle in her white lovely costume – a real fairy in the real world.  It is a wand which is honey blended, carved with immortal spells on it which need not be  spelled by the wand or the enchantress itself rather, I felt, just look at it once, more and enough to get hypnotized.

It is a complaining wand, which I think cursed me with pure love and taught me the art of loneliness.  It was once, I was close to my enchantress, lot of spells she waved in the air but nothing had had an effect on me, know why! I didn’t listen to the spell but before that I just saw the carvings on the wand for the very first time and my eye struggled to move out of it though my heart pondered with the fear of a curse from her.  It seems, Epigraphist hiding inside me read those carving and because of that I was mesmerized or hypnotized, not sure thou, possibly I went to trance state.

That does not happen most times but once I wanted to get mesmerized with the spell of that enchanting wand.  I went near the enchantress to fake a sorry, because I used a black magic to enchant the enchantress.  That was a croon I heard, a very short spell for my life time “that’s ok” with the feminine blend.  Only I and my enchantress close to each other, but separated by lucky wooden furniture.    She blessed me with a second of blossom, wondered a wand could bloom too! That was the magical gift my enchantress gave me for my life time.

Dear my enchantress that was for my life time, you have spelled a magical chant on me to dwell in my loneliness with you in my heart.


You do not belong to this world filled with witchcraft.  You belong to my fairy world – doors are opened always.

Anybody who is, was enchanted could understand what I mean.