My Soul and Soul mate

I heard the sound of the footstep growing louder in the steps, I stopped.  In fact I did not realize that I stopped, and the reason I stopped I know not. It is the beat of the broken piece of my heart, the other pole of my heart – which always repel.  Every minute cell of my mortal body has frozen, but my soul was heated up with what it was searching for centuries.  I know my soul mate is around and my soul know she is its mate, the soul which could make my soul complete. 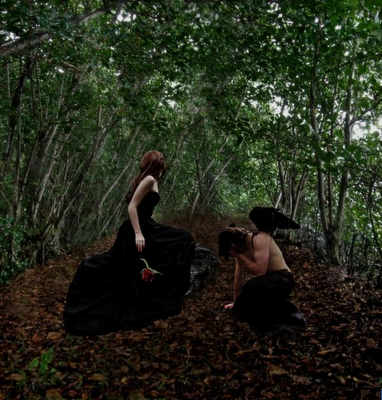 I was on my knees; she was standing in front of me with no smile, no angry but with all doubt of this world.  I tried all possible ways to prove her that I am no wrong but none worked.  Tears rolled downed from her eyes I took my hand to stop it, she hesitated.  She looked beautiful even in that dark night, a night filled with the love of full moon.  The moon seemed no white, no beautiful to me and my enchantress standing before me looked thousands times beautiful than that moon because she glows by herself not like the moon which kidnaps the light from the earth.  She didn’t believe me, not even for one single beat of my heart.  She thought it’s just tissues or muscles or cells which slept in my ribs and how did she fail to know it never slept and it’s the shadow of her heart.  I touched her finger; softness of a new born, freshness of raindrop embraced me.  She pulled her hand away from me and wiped her tears.  I bent down to her foot and kissed her just to tell her I do not have any ego ’it’s your lips or foot it’s all sacred for me, I do not have any ego’.  She drew herself back and turned away from the moon which so far embracing her with its shameless lights.  I caught her hands, she released herself from my hand and started to walk and when she walked to a distance I shouted ‘believe me’ and by the time she stopped and turned to me, my dagger used my chest as its scabbard she came running towards me and all I remember was only that few steps she took running towards me…

I do not know when this happened, and in my which incarnation but I know after that that incarnation came to an end I was longing for her for centuries and so far she didn’t realized that it’s her  who had not believed me and she was my half soul and she repels still.  I do not know what the mistake I was trying to prove her that I am no wrong but she; my soul mate.

I promised her that I am walking away from her sight, now I could not turn to look at her; I dwelled in to complete silence my urge to turn and look at her increased rapidly but I do not want to do because I might hurt her with my saccades.  And I am right it’s my soul walked down from the steps the same lady whom I kissed in her foot to apologize, to tell her that I have no ego which she didn’t believe then and I believed even now.  I walked few steps and turned to look at her walking.  The same walk of beloved, my enchantress, the Venus, my soul who walked releasing her from my hand.

I felt like going on my knees again, kiss her foot and tell her ‘I still love you, I am born again for you” and ask her “tell me what happened after the moment I stabbed myself?” – All these things are goanna happen not.  She walked with the same agony, thousand virtual swords torn me in to pieces.  I wanted to shout ‘believe me I am you and you’re me’ and use my chest as the scabbard again and see her come running towards me.  I can wait for another incarnation.

I quickly walked since I promised her I am walking out of her sight but forgot to tell her that that promise is just for this incarnation or until she breaks it.

I was in an total tranquility, nothing seems to move around me but the image of the moon, my angel, my dagger came to my mind again and again as if it has happened yesterday but I know that had happened and even if that is goanna happen again I will be ready to take another incarnation.  A calm pang caressed me along with the light cold air of the night, I want to cry like hell, shout the same shout which I did before that death.

I laughed.  But I laughed; I do not know the reason.  With all that pangs, I laughed like an insane and I now know it’s not the tears alone the outcome of pain, sometimes the laughter.